Australia Back to the Dark Days

In the space of a day and a half, Australia was taken back to the 80’s and 90’s. Tours of India back then were reduced to guffaws, beer that gave you headaches (a by-product of the glycerine used to preserve it in Indian heat, and extreme volumes 80’s cricketers consumed it in), shit food, food that gave you the shits, and a series of dodgy umpiring decisions. It was enough to drive some players into conceiving a Punjabi character that played on the worst racial stereotypes.
Fortunately times have changed. Except for Greg Ritchie, who was still somehow getting work as an after-dinner speaker, where he thought saying the word…. Actually nevermind. Facilities in India are now first class, and with 90% of players income generated in the country, it would be a foolhardy soul to complain in any case.
Which makes it even stranger that, with MS Dhoni seemingly channelling all the unbridled aggression that his countrymen on Twitter are renowned for, the Australian team decided to take their cue from the fraying team of late 90’s. Leaving the ever-impressive James ‘The Good Pattinson’ aside, who threw everything he had the India team (sweat, reverse swing, swearing at them through his lapel), the signs of the Hell Tours of old were coming back.
Nathan Lyon did his best Gavin Robertson impression. Robertson, described by Steve Waugh as ‘a cricketer of real substance’ but more accurately described as ‘the best man at Steve Waugh’s wedding’ and ‘the bass player in Six & Out’, toiled for 3 tests in India in 1998 for not much of a return. Lyon looks set on emulating this non-feat. His furrowed brow making him the oldest-looking international sportsman since Arjen Robben lost his hair at 21, his chin-stroking and lip pursing looking even less convincing with each knee high full-toss. 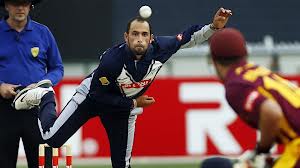 Lyon would appear to have until August 18, the day the ICC have decreed Fawad Ahmed an Australian, to save both his role of chief spinner and victory song leader. If he can start hitting the claymotion pitch(check out this picture http://instagram.com/p/WHNIpWOAbp/ ) then he may stand a chance of redeeming himself. With conditions the way they are, and Moises Henriques and Peter Siddle filling the Adam Dale role, he is still Australia’s best chance of revival.
Until then, the challenges lie with the Australian batsmen to either bat time for a draw, or score enough to put the game just out of India’s reach. For that to happen, Ed Cowan will need to put his sluggish performance, and also the looming, snarling, coveting shadow of Shane Watson to one side and play his normal game. Hopefully Dave Warner won’t let his still-fractured finger inhibit his batting in the same way he didn’t let it stifle his on-field batsmen abuse.
Or, just like most other innings of the last 18 months, they can leave it to Michael Clarke.