In my first blog for Cricket Depth I assessed how England had muddled their way through the World T20 in a way that was highly uncharacteristic of the meticulous Andy Flower regime. I stopped short of outright criticising Flower, mainly through gratitude of what he has done, but I did wonder inwardly if he was the right man for that form of the game.

Today brings us the news that Flower is passing on the reins to Ashley Giles, for both the T20 and ODI forms of the game, but will remain as the all seeing eye of England cricket. It makes for an interesting split.

Not so long ago England had three different captains, but many are still doubtful of whether Alastair Cook is the right man to lead England in any form of limited over cricket, despite his recent good form in the 50-over game. Now Giles takes full control it will be interesting to see what road he goes down, it would take a brave man to remove Cook from the helm right now however. It means the split between these forms of the game is widening ever further and is another step closer to the possibility of cricket becoming two different sports in the same way of Rugby League and Union. 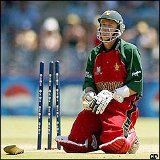 Personally, I think it is a good move for Flower. Touring is demanding and he has enough on his plate with the Test schedule as it is. Not only that, but despite playing 213 ODIs, he had a career strike rate of less than 75 and never played T20. Is Ashley Giles the right man? He has snuck up on the outside a little, but there is a sense that the powers that be have been grooming him for a little while.

The ECB have also made it very difficult for the management to drop Stuart Broad from the Test side now that he is T20 captain; an issue that is currently rearing its head in India with Broad struggling for form with both bat and ball. Now however, with a clear management division such tensions could be eased.

Will this also open the door for Mr Pietersen to once again say that he does not want to play 50-over cricket? There is a chance that Giles, a former team mate of several players still involved with England, may be more sympathetic.

For now though, expect the two men to be singing from the same ECB song sheet. How the different styles of management will impact on the players and the selection panel is going to make for a fascinating sub-plot.