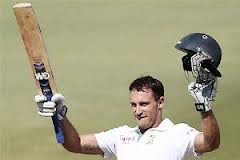 I love seeing South Africans lose. It’s just something about the confused look on their faces after another indecipherable choke that, along with rain in the UK, the first sip of an after-work beer, or purchasing a ticket to your favorite band that reminds you that everything is well with the world.

Which puts this innings into context. South African cricket teams aren't meant to fight against the odds. In fact, they’re often complicit in their opposition fighting against the odds. Faf du Plessis, the same guy who raged uncontrollably at Scott Styris as it all fell apart in Dhaka in 2011, played an innings that defied stereotype and everything that Australia threw at him.

It started in 2008. The year that Australia’s cricket fans stared dumbfounded at the television screen with the same confused ‘but we’re not SUPPOSED to lose’ look mentioned above. Emotions ran high, obituaries with mock headstones were published by lazy sub editors who were half on Christmas holidays, and Doug Bollinger tore so much hair out that he stapled some replacement strands to his skull (probably).

Back then, South Africa showed the skill, determination, and sheer bloody-mindedness that had previously alluded them to twice fight back against a creaking Aussie team (Matt Hayden, by that stage, was more chef then opener), becoming the first visiting team to Australia to win a test series in 16 years.

Just as I was beginning to think that The Mayans might have a point, 4 months later South Africa were punished by (ahem) Mitchell Johnson on home soil, a massive South African opportunity slipped through their fingers, and all returned back to normal.

This series has been running to type. A South African team seemingly too frightened to turn the screws on the opening days, a misfiring much-vaunted pace attack, selection issues, and injury problems were conspiring in a way that prompted one cricket writer, quite arrogantly, to assume an Australian victory on the 4th day and published an article about a return to No1.

But then Faf happened. Much like his similarly-named better-known-in-these-parts Rugby League counterpart, he showed astonishing grit, astounding concentration and no small amount of skill to defy Australia. The only thing that could’ve broken his concentration would be if they had piped Ian Healy’s bemusing commentary through the PA of the pre-Manhattanised Adelaide Oval.