Steven Davies is the only change in a 13 man squad for tomorrows LVCC Division One match at Lords against Middlesex, coming in for Rory Burns. 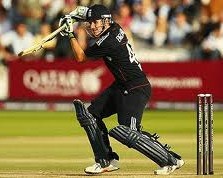 Davies will add even more vital experience to the Surrey line up, and is most likely to open the batting with Jacques Rudolph. Chris Adams said after the Sussex game that he is not sure where he will bat in the order, but he had most of his success opening last season, with Chris Jordan likely to drop down to number 7.

Jacques Rudolph and Mark Ramprakash will be looking to register their first major contribution this season, after looking rather rusty in the first game. Chris Adams has said that Ramps looks as good as ever in the nets, so let’s hope he can convert that onto the field. Tom Maynard will want to continue from where he left off against Sussex, where he looked sublime in the first innings, and equally as good in the second before being bowled by Anyon.

You never know what you are going to get with Rory Hamilton-Brown. In the first innings last week, he looked sketchy and out of nick, but in the second, he was a world beater. His innings alone went a long way to winning the game for his side, and if he can add consistency to his game, England wouldn’t be far away. His captaincy was generally very good last week, with the correct bowling changes at the right times, and good fielding placements for the batsman at the crease. The only glitch was that it took more than 25 overs of Sussex’s second innings before he brought on Jade Dernbach, who immediately got a wicket, but it didn’t matter in the end with the result going Surrey’s way.

Once again Chris Adams will have the hard decision of leaving out one, or possibly 2 of his bowling attack. Chris Jordan may drop down to 7, or may be dropped altogether, with Jason Roy possibly adding extra strength to the batting line up. Jon Lewis had a good debut, picking up 4 wickets, and the 2 England seamers, Dernbach and Meaker, also had good games, so it is likely again that The Viscount will miss out. However, if Adams does play Roy instead of Jordan, he may drop Gareth Batty and play The Viscount instead.

Just like last week, Adams has this selection dilemma, of which bowlers to pick. I personally think that the only change from the eleven last week will be Davies in for Burns, and Roy and Linley will miss out.

Middlesex our likely to name a similar squad from their defeat to Somerset last week, as Strauss and Finn our not available for this fixture. Their batting line up collapsed terribly in the second innings, and after beating Surrey by an innings in the last 2 visits to Lords, we will be looking to exploit their weaknesses and get some much needed revenge.