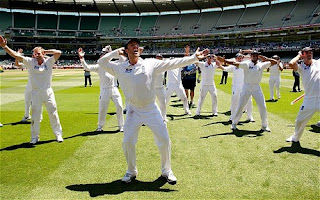 Last year was a strange one. At various points England were ranked number one in all three formats of the game, yet only finished the year at the top of the 50-over tree. After the warm up defeat yesterday I am not entirely sure that placing is justified.

Supporters should however, be optimistic. It is hard to think of a year when I looked at the fixtures and though: “Yeah, we could win the lot of these” and yet that is what I am thinking right now.
India are in danger of becoming the new Pakistan; wildly unpredictable and prone to complete disintegration when things go against them. At least this is what we have seen in the last two Test series. In fact, they just lost to Pakistan at home in a three match ODI series, which will have done little to get the public back onside.

OK, so last time England played a 50-over series in India they lost 5-0, and it was not that long ago either, but much seems to have changed since then and despite all the talent this India team, I still think England have a great chance, 3-2 to either side...hopefully England. Then there’s New Zealand. What a mess they are in. Despite their creditable series draw against Sri Lanka away from home, they lost 2-0 away to a pretty average West Indies side and then 2-0 in India, meaning they lost four Tests in a row in a run of no wins in seven. That’s without mentioning getting rolled for 45 in 19.2 overs in Cape Town last week.

They have lost their best player due to a captaincy debacle and seem, from the outside at least, to be struggling with team unity. This is an enormous shame as that has always been their biggest asset as a bunch of cricketers proved greater than the sum of their parts. I honestly cannot see them testing England in either the three match series at home, or the two match return leg over here.

Then there’s Australia. Plenty of talent there for sure, but I doubt they are getting too carried away with whitewashing the notoriously poor travellers that are Sri Lanka (they have not won a series away from home since beating Bangladesh in 2008/9), but they at least have some hope thanks to the seamlessly bottomless pit of fast bowlers they are producing.

Their batting however, will not be giving England any nightmares. No sooner had one commentator said he wanted Shane Watson “put down” did Mike Hussey announce his retirement after the following Test. What a kick in the groin that was. If Australia come to England with a top four of Dave Warner (Average: 44) Ed Cowan (32), Phil Hughes (36) and Watto (37) then England will be rubbing their hands with glee. It seems that Michael Clarke will have a burden on his shoulders similar to that of Atlas.

The other worry is that the backup is hardly awe-inspiring either. Long gone are the days of Stuart Law, Darren Lehmann and Martin Love waiting in the wings. Now it’s Rob Quinney, a 30-year-old with a first class average of 36. Oh, and Brad Haddin is coming again too. At least in Matthew Wade they appear to have found a talented keeper able to cope with the God-awful pressure of being the next Adam Gilchrist.
They will be tougher in the return series down under for sure, but all in all I think England have every right to look forward with optimism for 2013...just as soon as they stop losing warm-up matches to second rate sides of course.