The Aussie left-arm pace bowler, Mitchell Johnson, is also an ambassador of Spartan Sports. He signed with them in 2011. Below is Mitch with the bat.

Chris Gayle, will also be using the gear. The Jamaican born missed out in today's IPL as he is suffering a minor groin injury. He was sitting on the sidelines watching his fellow team mates win against Deccan Chargers. 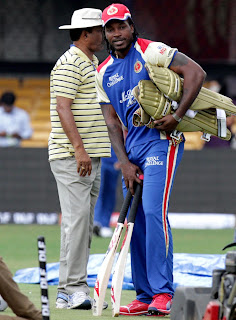